I was recently a guest lecturer in a graduate-level Trauma Theory & Treatment class at Loyola Marymount University. The class is part of the Marital & Family Therapy Program with Specialized Training in Clinical 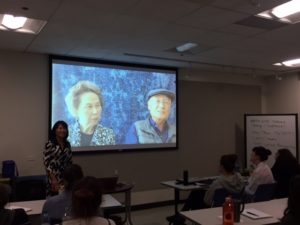 Art Therapy. I spoke about my family’s history and the sociopolitical context that compelled my family to immigrate from Korea to America in 1971. The lecture focused on the struggles and multiple displacements that my family experienced, and included photos and videos. From my presentation, students learned about the complex nature of immigration and how it could contribute to trauma. It was one of the most memorable days of my life.

My friend and art therapist, Dr. Paige Asawa, asked me to speak about my family’s immigration story because it represented the little traumas, or little t’s, that could add up to big T’s called cumulative trauma. She suggested that my family’s experience was an example of what trauma could look like over a long period time. The goal was for her students to hear the story so that they could better treat immigrant families in the future.

At first, I didn’t think our immigration story qualified as trauma since there was no bodily injury and obvious emotional shock. In fact, when Dr. Asawa asked me to speak, I said “Are you sure?” I didn’t believe I would be able to add anything to her class. However, as I prepared a powerpoint presentation for the lecture using family photos and captions, I began seeing  little t’s that I had never really noticed before. They jumped out at me for the first time, and I started to see my family’s immigration experience in a new light.

I found the first little “t” in the photo of my grandparents on my father’s side on their wedding day in Japan in 1936. They had immigrated from Korea to Japan during the Japanese Occupation for better 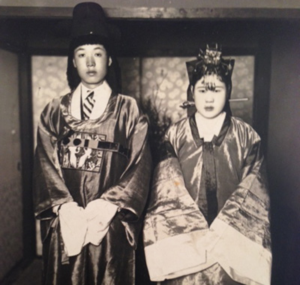 economic and educational opportunities. They were displaced from their birthplace, had to learn a new language, and were forced to change their names to Japanese names. After my grandfather passed away when my father was only four months old, my grandmother and father returned to Korea so that my grandmother could avoid being drafted into the Japanese army as a nurse. These experiences were traumatic, and might have implications for future generations.

Another little “t” showed up in a photo of my family after immigrating to Los Angeles from Seoul, Korea in December of 1971. My parents came for economic and educational reasons, but this time because of business corruption and intense competition for limited educational opportunities. My father also had a lifelong dream of reclaiming his birth name, which was lost upon adoption. He thought it would be easier to change his name in the U.S. since it was almost impossible to do in Korea. The very act of changing your name in Korea would bring shame to your ancestors and family.

When we immigrated to Los Angeles, I was seven years old. My younger brothers and I didn’t speak any English and had very little knowledge of American society, culture, or customs. Gradually, our old behaviors changed and began resembling those of the dominant culture through a process of assimilation. We acquired “American” names, watched popular TV shows, and wore jeans and tennis shoes. We copied everyone else because that was how we were going to adapt and survive.  We weren’t able to retain our old Korean selves if we were to become Americanized. Now I realize that those experiences were a series of little t’s that may have had mental health implications.

I also shared a YouTube video of my parents in conversation about their immigration experience. I encouraged my parents to document their stories as part of a Palos Verdes Library District recording project to preserve local residents’ histories.  The conversation was facilitated by a moderator from Berkeley-based StoryCenter, and resulted in short video clips of my parents talking about their reasons for coming to the U.S., how they adapted, and what they would do differently now.

The video of my parents showed more little t’s. My father used to cry at the dinner table every night after coming home from cleaning bathrooms as a janitor. My mother stood up for eight hours straight spinning thread on the assembly line during her graveyard shift, and then had to take care of three small children. 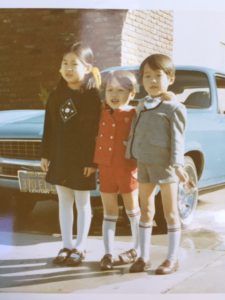 They couldn’t afford to pay a babysitter, so my mother had to call her mother to come from Korea to help. It was life or death. It was traumatic.

When you add up all these little t’s, you get a big T. I think the big T for me was that I felt invisible and powerless. I rarely spoke up and didn’t assert myself out of fear of standing out and being seen. I wanted to be like everyone else, not someone who was different and an outsider in society. I rejected my Korean heritage and was embarrassed about my slanted eyes and straight brown hair. My heart sunk at hearing my parents’ broken English at parent/teacher conferences, when the teachers would have to speak ever so slowly and I would have to translate. I made fun of myself alongside my classmates when they teased me about changing my last name. My father finally achieved his dream of changing his name, but I suffered the consequences. “Hey, that Chink changed her name. Did her mother get remarried or something? Ha ha ha!” It sounds cliché, but I went along to get along.

I was ashamed of myself, my parents, my country.  That shame stayed with me even as I grew into adulthood. I only started to embrace my Korean identity in college after a summer of learning Korean in Korea. I had to reconcile my American self with my Korean past. It was then that I became interested in my family’s rich history. I’ve been learning more about my family’s story ever since, and writing about it in my book-in-progress.

I don’t want other immigrants to sit back in silence. We are a nation of immigrants and our experiences need to be heard. It’s when people hear and witness our stories that they become real. Our voices must be shared in order for people to better understand each other, especially now in our polarized country. We must become more visible. We need to do this for our children, so they will remember their past and be more tolerant of others.

One of the students in the class came up to me after the lecture and told me that she was from Sri Lanka and wished that her parents’ story could be videotaped. She told me that listening to me encouraged her to ask her parents more questions about their past, and find ways to preserve their story. Another student said that his experience as an immigrant from Taiwan was very similar to mine. He asked me to come back as a lecturer in the fall to follow-up on their progress based on what they learned from my talk. I hope I will be able to do that!

I trust that when these students graduate and go out into the world, they will be sensitive to each patient’s past, especially if it involves moving from one country to another. Immigration stories should be examined more deeply and better understood. The benefit of hearing my family’s story is not just for future art therapists. I believe that we can all learn from each other’s experiences as a way of gaining more empathy and compassion, and sharing in our humanity.

I hope you will give voice to your stories too. I would love to hear about the ones that you didn’t think were traumatic, but may have been little t’s after all.

If you want additional information about Dr. Paige Asawa or the Helen B. Landgarten Art Therapy Clinic at LMU, click here. To learn more about how the Palos Verdes Library District is using the Listening Station to record personal histories, contact the Local History Center. Read more about StoryCenter and all of its wonderful programs here.