My Very Own Happiness Project

As I was contemplating the next prompt in my autobiography writing class about happiness, I read Gretchen Rubin’s books called The Happiness Project and Happier at Home. She dedicated 12 months of her life to seeking happiness. She discovered that although she couldn’t always be happy, she could be HAPPIER.

Then I had an epiphany.

What if I did my own Happiness Project by trying to answer the question “How could I be HAPPIER than I already am?”

The answer began with William Butler Yeat’s poem “Happiness is neither virtue nor pleasure nor this thing or that, but simply growth. We are happy when we are growing.” I searched inside for a happy memory where I felt I grew as a person, so I could learn from that experience about how I could become happier.

In my last blog, I wrote about my September resolution: Be perfectly imperfect! For October, my resolution will be “Be Happier.” By writing about it, I hope people will search inside themselves to their find their own way to becoming happier.

One of my happiest experiences was when I was learning Japanese in Vermont and eating Ben & Jerry’s ice cream. I was 24 and attending the Middlebury College Summer Language Program in Intensive Japanese, where I signed a contract to speak only Japanese along with 100 or so other students. We were all primarily English speaking college and graduate students from different universities with varying levels of Japanese ability who were committed to improving their Japanese for a summer.

Many different languages were offered on the idyllic Vermont campus, such as French, Russian, Chinese and Arabic. Every summer, the small, rural town of Middlebury became flooded with ill-speaking foreign language students chattering in different languages. The residents at Middlebury were so used to it that they didn’t bother to stare at us when we clustered in awkward groups trying out our foreign language skills in public. 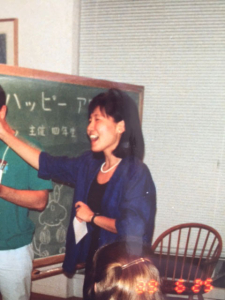 I was nervous because although I had taken Japanese for many years and had even spent my junior year in college abroad in Japan, I was still uncertain of my abilities, and felt I had to prove myself all over again. I needed to fulfill my language requirement for my Masters in International Affairs, and after a year of being in New York City, I thought a change of scenery in the Vermont countryside would be a good way to accomplish this.

It helped that I wasn’t in this alone, and everyone else in the program also had to sign the language pledge and take placement tests. What was different about this program than other language classes and even living in a foreign country was that we had to speak Japanese everyday, all day long. Even when I was living in Japan, I had the opportunity to lapse into English because Japanese friends and acquaintances would want to practice their English. Well, no one was allowed to do that here. And with a Japanese language instructor being my next door neighbor in my dorm, and sharing a bathroom down the hall, I had no choice but to comply.

“Ohio Gozaimasu. Ee tenki desu neh?” I said to my hallmate/Japanese instructor in the bathroom while bowing and brushing my teeth at the same time. That translates into “Good Morning, It’s a nice day isn’t it?” Mrs Ogawa turned to me and replied politely “Ohio Gozaimasu.” Then she launched into something I couldn’t really understand, even though my Japanese was pretty good. I continued to nod anyway and listened intently to every word. She repeated herself slowly, and I could make out something about breakfast. I clearly had a long way to go to conversing freely with a native speaker.

Misunderstanding and making mistakes were the norm in this program. Saying the wrong thing and being corrected was happening all around me. Complete lack of understanding of what was being said was alright, as long as you tried, even if it meant just nodding your head and smiling. It reminded me of when I first came to America from Korea as a seven year old, and barely knowing any English. Although it was uncomfortable, I dove in, and did the best I could.

What I realized that summer was that I was utterly happy in this state of ignorance and vulnerability. Why? Was it because it reminded me of my childhood of moving to a foreign country and learning a brand new language? Was it that I felt like a child again, role playing as if I could be that person who is fluent, and released from fear and expectation? How could I bring this happy feeling back?

As I thought about this, I couldn’t help but think about the recent Brene Brown talk I attended in Santa Monica. She was promoting her latest book Rising Strong, and her message resonated with me. She suggested that those who fall and are most uncomfortable, get up the fastest. Those who rise strong are those who are most in touch with their emotions, and they are not afraid to lean into discomfort.

Happier is Learning a New Language

I realized that I was happy at Middlebury because I was open to new experiences, despite my fear of failing. Trying to speak in a foreign language, even if it meant exposing all of my weaknesses, was the very thing that allowed me to grow. By living in an unstable, unpredictable state, I grew, and growing made me happier. 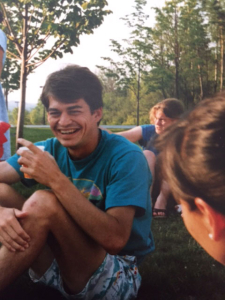 Well, there was another reason Middlebury was one of my happiest experiences. By allowing myself to be open to criticism, praise, frustration, laughter and all of my range of emotions – the good and the bad – I met my future husband, Mark. He had also stepped outside of his comfort zone by participating in this program, and we were like two open books when we met. We had no armor, no language to hide behind, no past that we needed to explain. We were living in the present moment, trying to navigate our new, language-challenged world. We were our purest selves, and we allowed our authentic voices to be heard.

Try it. Try impressing someone new, with only a limited grasp of the language. It started like this when Mark and I first met on the tennis court a few days into program. “Konnichiwa,” we shyly said to each other in Japanese, bowing as we exchanged hellos. We played a fun game of doubles with friends, and we were so busy trying to keep score in Japanese and laughing at the concentration required to count, that we didn’t care about how well we actually played.

The next time I saw Mark, he was serving Ben & Jerry’s ice cream in the dining hall, where he worked part-time. When it came my turn in line to order, I said “sukoshi,” which means “a little” in Japanese. Either pretending that he didn’t hear me, or that he didn’t understand, Mark scooped the largest spoonful of ice cream into my bowl, and smiled the biggest smile. “Domo arigato,” I said with my face flushing pink to my ears. We exchanged very few words during those first few encounters, but there was no doubt we were communicating our feelings toward each other. 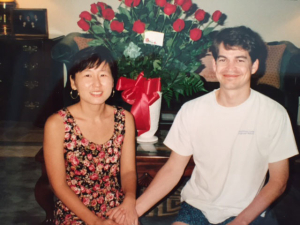 What I experienced that summer learning Japanese in Vermont is what I want to bring back to my life now as my very own Happiness Project. How can I be happier, knowing that I was so happy that summer immersed in a foreign language? How can I continue to grow as a person as I age? One thing I have learned is that if I lean into discomfort and allow myself to be vulnerable, I can be happier, even if it means I may not say or do something perfectly. This is what I would like to try to apply to my life now.

Does it mean I need to learn a new language to be happier? It probably means my new language will be the written word, and I will continue to write to be happier. But maybe, if I had the right opportunity, I would take up Italian next.

Think of a happy memory in your life. How can you use what you learned from that experience in your everyday life now? What would your Happiness Project look like?  Leave a comment below with your thoughts.

Congratulations to Teri C. for winning the Daring Greatly book and a signed copy of Autobiography Matters: Themes of Our Lives. Thank you all for participating in my contest, and happy reading Teri!