As another Father’s Day passes, I can’t help but reflect on the two fathers in my life, and how they have influenced me.

The Land of Hershey Bars 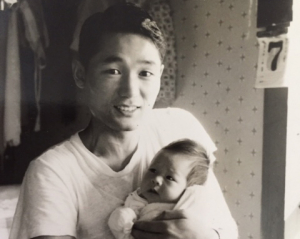 My father, David Soonho Kwon, is one of the main characters in my book, Echoes Across Time, and I was able to learn a lot more about him and his life through a series of personal interviews. His tender story of loss of family in Japan, loneliness growing up with strangers while his mother worked far away, and fighting to make a life in the U.S. with my mother and three small children, moved me deeply and inspired me to write.

My father was determined to come to the U.S. to provide more opportunities for his children and to fulfill a dream of reclaiming his rightful name. He had an idealistic vision of America as a land of Hershey bars that he could eat whenever he wanted, unlike the one he hid in his pocket and walked for miles with as a boy to share with his mother (you can read this tale in the book excerpt). His Hershey bar story taught me about the importance of family, and holding onto your dreams.

Without my father’s vision of a brighter future for him and his family, I wouldn’t be here. My father worked various odd jobs when we first arrived in Los Angeles in 1971, and he sometimes worked two jobs at the same time to provide for us:  as a bank teller by day, and janitor at night. He knew the meaning of hard work, and perservered even during the darkest hours when he doubted his decision to come to America. He gave me his pioneering spirit and optimism, that I carry to this day.

A Love of Japan 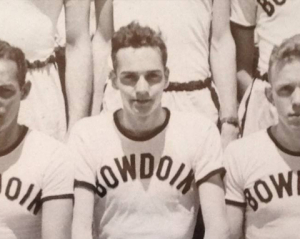 My father-in-law at his alma mater, Bowdoin College, circa 1945.

My father-in-law, Charles Cabot Easton, has a sense of adventure and is always curious about the people and world around him. He graduated from Bowdoin College in Maine, Class of ’48, and was state cross country champion. Due to his asthma, he did not serve in WWII, but was later sent to the Korean War where he became an officer (first lieutenant). He was stationed in Sendai, Japan as part of the US Army Signal Corps, and part of his duties was breaking codes. During that time, he traveled all over Japan, and he published a number of articles about Japan with his own photographs. His love of Japan filtered down to his children, and happily for me, to his son, Mark, who I met studying Japanese at Middlebury College in Vermont of all places!

My father-in-law’s legacy is that he is open-minded and inclusive. His wider perspective on the world meant that he accepted me as a daughter-in-law immediately. He is kind, funny, and always makes me feel at home. His career was in fundraising for educational institutions, so making others (especially me) feel comfortable and welcome came second nature to him.  He has taught me to enjoy life everyday, show people you care, and seek sunshine wherever I go!

The Point of Intersection

While Cabot ventured to Japan during the Korean War, my father journeyed to America for a better life. They traveled in opposite directions, but their destiny was to meet through their children. Cabot’s openness to the world prompted his own son to learn more about Japan, and my father’s experience of coming to America encouraged me to spread my wings to try college in the Northeast. Thanks to our fathers, as they say, the rest is history.

I hope you enjoyed celebrating your father on Father’s Day! Let me know how your father influenced you and your path in life. Leave a comment below.