In the movie The Descendents starring George Clooney, the offspring of an Hawaiian family fight over whether to sell their family’s ancestral land to developers or to keep it in the family. The story was really about Clooney coming to terms with an affair his wife had been having before she fell into a coma from a boating accident, and through that struggle discovering that what he wanted all along was to fight to keep the land.

In a previous post, I mentioned that I am taking an online fiction class and may be re-working my book into fiction. The course is called Story Genius and I am learning a lot about external plot (the dispute over what to do with the land), and the protagonist’s internal struggle (Clooney overcoming his fear of conflict to achieve his desire to keep the land). It’s really been an eye-opening class and I have been seeing deeper meaning in stories all around me, including movies!

I have also been thinking about this movie because my father just returned from a trip to Korea where he too had to deal with the future of the Kwon ancestral lands. Although there wasn’t another story line of a relative dealing with a family tragedy, it still made me think about the meaning of land ownership, especially land jointly-owned by multiple family members over generations. 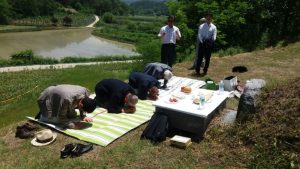 The Kwon property is held in trust, and there’s a caretaker who is paid to maintain the tombs and the six acres that my family owns in rural Korea. The first son of the oldest male member of a generation usually carries the burden of ancestor worship, or in his absence, other male members. Women typically do not play a role, and their names are not listed on the tombs themselves.

I marvel that even in this modern age, these ancient Confucian traditions of honoring ancestors still exist. The original Kwon’s came from an area of Korea called Andong around 676 A.D. My father recently visited the tombs of the 33rd and 34th generations in Yaechon, Korea. The 35th and 36th generations are buried in Japan, where they were forced to go to find work during the Japanese Occupation, and where part of my book takes place.

The 38th Generation and Beyond

My father’s recent trip was to entrust the obligations of honoring our ancestors to the 38th generation, which includes members of my generation in the U.S. and Japan. In doing so, my father realized that after the death of all the members of his generation, the tradition might not continue much longer due to distance, language barriers, or lack of interest.

I think it’s important to remember these customs and talk to this generation about them. In The Descendents, the younger generation stood together to preserve the ancestral lands, so there’s still hope for us.

As we celebrate Father’s Day, I reflect on my role of being a descendent of my ancestors. How can I help continue some of our family traditions?

Do you have family customs that have been passed down through generations?

As always, thank you for reading and sharing!

Happy Father’s Day!  Have a wonderful day honoring a father or a special father-figure in your life!